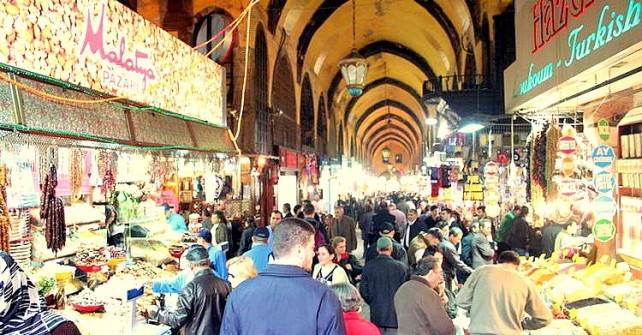 There are several documents suggesting the name of the bazaar was first “New Bazaar”. However, due to the fact that many spices were imported via Egypt in the Ottoman period, the name “Mısır Çarşısı” was favoured by the public.

The word mısır has a double meaning in Turkish: “Egypt” and “maize”. This is why sometimes the name is wrongly translated as “Corn Bazaar”. The bazaar was (and still is) the center for spice trade in Istanbul.

The building itself is part of the külliye of Yeni Mosque, and rents from the shops within was intended to help pay for the upkeep of the mosque. The structure was designed by the chief court architect Koca Kasım Ağa, but completed by architect Mustafa in 1660.