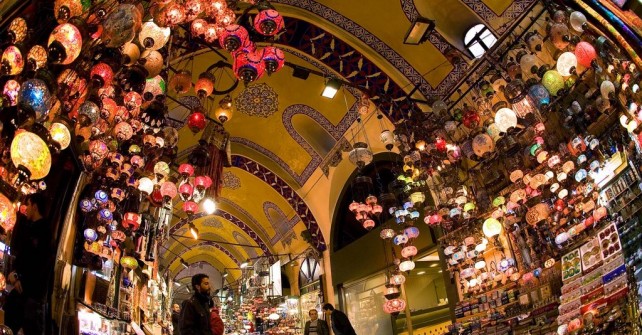 The Grand Bazaar is called in Turkish Kapalicarsi, that means covered bazaar. It is located in the area between the Nuruosmaniye and Beyazit Mosquesand Mahmutpasa Market. It is one of the largest covered markets in the world. It has more than 58 streets and 4000 shops. It is well known for its spice, jewelry, leather, meerschaum pipes, copper & brassware, tiles & pottery, carpet shops and all sorts of other things.

The Grand Bazaar has 4 main gates situated at the ends of its 2 major streets which intersect near the southwestern corner of the bazaar. Various shops sheltered by roofs and domes. Though not very regularly shaped, it holds and area of about 31.000 square meters. The Grand Bazaar has hundreds of domes which are covered with lead and windows.

Istanbul’s Grand Bazaar is a small town in itself, with miles of passageways, restaurants, mosques, banks, police stations, and many shops.

Fires and earthquakes have both affected the building many times. The most recent being the major fire of 1954. After each event, it was repaired, but original records have been lost forever. It is one of the oldest markets of the world and the most interesting and authentic places in Istanbul.